The Skilled Migration Program allows people who have no previous relationship with Australia to migrate to this country directly from overseas, and after 4 years in Australia apply for Australian Citizenship.

The purpose of the Skilled Migration Program is to unite individuals with skills in demand in Australia with real job opportunities in the Australian labour market, and to meet the demographic challenges of an aging Australian population.

The benefits of the Skilled Migration Program are mutual, with Australian employers benefiting from a steady stream of highly qualified and experienced people moving to Australia to fill positions that cannot otherwise be filled. The personal outcomes for individual migrants are also fantastic in terms of finding well paid and interesting jobs in a country that welcomes new migrants.

With a permanent visa you and your family are entitled to work in any occupation, study at Australian schools and universities, access public hospitals and free health services, buy a house, travel between Australia and your country, sponsor family members to move to Australia, and access the social security system including Child support payments and the new home buyer’s scheme.

After living in Australia for four years you can apply for Australian citizenship and a passport. You will not have to give up your original citizenship but can become a dual citizen of Australia and your country. The entitlements reflect the genuine desire on the part of the Australian Government to open the full benefits of citizenship to those who choose to migrate to Australia.

The Australian economy is strong and stable and integrated with global markets. As a result of structural and policy reforms it has proven itself to be flexible and resilient.

This has been highlighted in recent years by its ability to withstand a number of internal and external events, including a major drought, recessions in the USA, financial and economic crises in Asia and Latin America, the Global Financial Crisis, and most recently the ravages of the COVID pandemic.

Since 1991, Australia’s real economy has grown by an average of around 3.3 per cent a year, and combined with on-going investment in the economy, the mining boom, and demographic changes related to an aging population, the unemployment rate has fallen to generational lows.

There is an on-going demand for skilled labour within the Australian economy that cannot be met by local supply. The response of the Australian Government is the Skilled Migration Program.

Australia is a secure and prosperous society. Social and governmental institutions are well organised and stable, there is high degree of social harmony across all levels of society. As a result, there are low levels of crime.

In addition, the Australian Government provides a system of support to citizens and permanent residents that protect both vulnerable individuals and the wider society.

Partly based on the low crime rate, the United Nations has declared Australia to be one of the best countries in the world to live due to the excellent quality of life afforded to Australian residents. The UN came to this conclusion based on an annual survey evaluating indices of social and economic welfare in 174 countries. Australia ranks highly due to its record in providing access to education, high life expectancy, and low levels of crime.

In part this is due to the wealth of the country and the absence of extreme poverty, but also the friendly attitude of ordinary people. With a strong economy, even in these times of COVID uncertainty and financial crisis, Australia is the perfect place to be young and fancy free or to bring up a family.

The Australian response to the COVID pandemic has been magnificent. The Australian Government closed the border effectively minimising the influx of the virus from overseas.

Secondly, when outbreaks COVID did occur the country went into comprehensive lock down, and the Government spent billions of dollars supporting businesses and individual through those difficult days.

The result is that COVID is largely under control. The Australian Government is now facilitating a national vaccine program and building new quarantine faculties that will allow international travellers to return to Australia in large numbers. Life is largely back to normal without the need for wearing masks or restrictive social orders.

All Australian citizens and permanent residents have access to the free public health system consisting of world class hospitals, well trained doctors, and subsidized medicines. The system is called Medicare and is financed through a progressive tax system.

Australia has a system of social security that provides economic and other kinds of support to vulnerable people within the community. Government agencies provide assistance to pensioners, disabled people, the sick, and unemployed.

In addition, there are a number of supports that the Government provides to families through subsided childcare and tax breaks and cash payments for families with children.

The Australian Government has a system of free and compulsory education for all students until the age of 15 years. Participation and the attaining of high school qualifications is a high priority for the Government, and this is reflected in the high graduate rates of students.

Entry to universities is competitive and based on academic results. Universities are state owned and while it does not cost anything to attend university students start paying university fees after they graduate and start earning an income of at least AUD$49,984 per annum.

These fees are paid through the tax system. This system is designed so that everyone has access to superior education regardless of income.

How to apply for a Skilled Visa - Step by step

To apply for any Australian visa is to commence a legal process under Australian migration law. If you meet the legal requirements at each step you will be granted a visa. The visa process takes on average 12 months to complete giving you the opportunity to organise your departure from your country and arrival in Australia.

For a Skilled Migration visa there are 8 steps that you must complete. 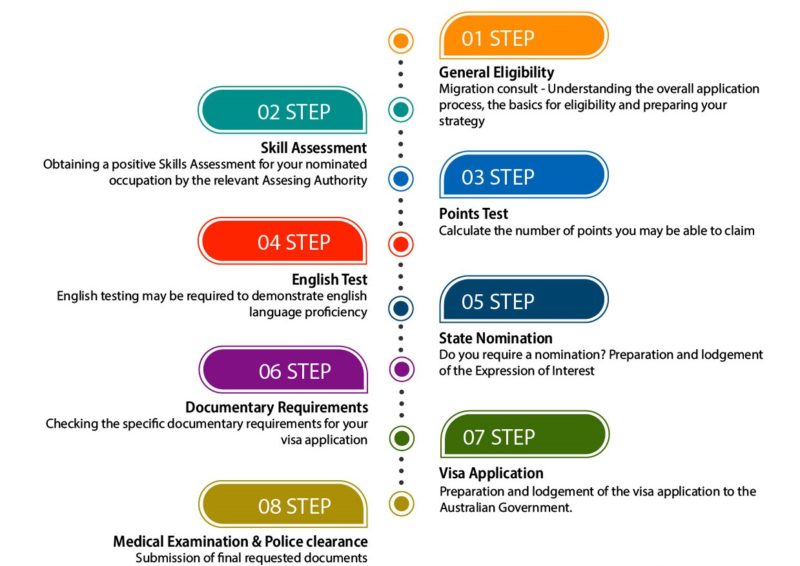 Speak to an Expert 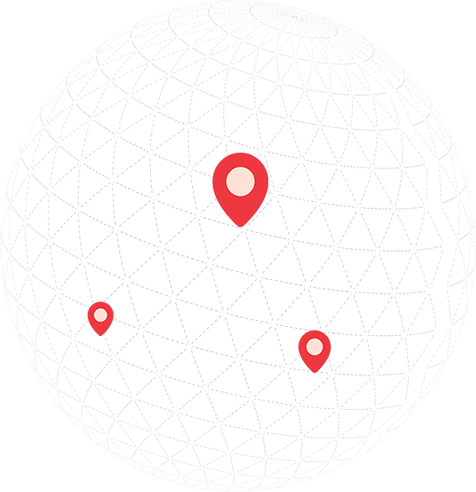